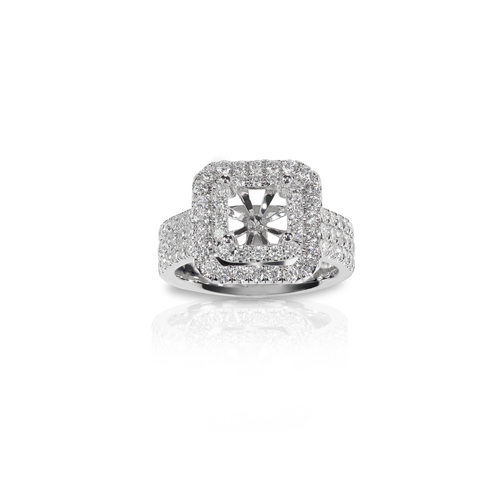 Sometime back, a lot of people thought that the solitaire was the only setting you could have when having a diamond or gemstone studded on a ring band made of a precious metal. It was simple enough to think that, and we all did it at some point in time. Then came a deluge of new and varied alternate settings, which rivaled and even outdid the solitaire on many levels. The halo setting is one of the most popular among these. Following is a detailed comparison between the halo and the solitaire.

Not all trends come out of pure nonsense, and some of them, such as the halo design, are favored for being smarter choices than the conventional pick. For one, a halo setting delivers more bling for your money than most other designs are able to muster. It encloses the main diamond using a group of smaller stones, laid out in such a way as to accentuate the center diamond’s size. The extra stones are also elevated lower than the main one, which allows the latter to sparkle much more intensely. The price of the stones would be based on the material qualities of each, but you could significantly compromise on that and still get something that looked truly awesome.

This setting offers better protection to the center stone than the solitaire, and as such is suited to the kind of woman who uses her hands a lot. Diamonds are tough, which is why you expect them to take years of abuse and retain their shine, expect they do not. A solitaire setting exposes your center stone from every angle, while a halo setting does much the opposite.

A solitaire engagement ring never fails to make a statement, which is that your beloved is the only one for you. A halo, on the other hand, can speak on a more personal level, saying that she is worth a lot more than all the different things you are used to, including the tiniest and most special comforts you cherish in life. Every one of the latter pales next to her, the way the halo stones on the diamond ring pale in comparison to the single center stone. Both the halo and the solitaire convey powerful messages, but you need to be sure you pick the one that better suits your girlfriend.